The Board and Volunteer team who govern and care for the cemetery operate as Conservators and Historians.

The field questions and ancestral research from people throughout Canada and the world.  As they document the monuments within the cemetery, they are able to add to the family histories of those buried here.

When Harold Harnden was working in the cemetery some years ago, he found these stones covered with earth and worked to have them brought to the surface. Again the stones were getting buried and we have rescued them and have them standing in keys the way they were at one time. You can see the location is in the north west corner of the cemetery from Blyth Road. Each life no matter how long or short should be remembered.

Unable to know exactly what happened, can you believe that a family lost 7 children within 6 years? The pain and suffering that those parents must have been terrible. We would presume that some of the deaths were disease.

The infectious diseases of the day were cholera, smallpox, typhoid, tuberculoses, also included in deaths were poor diet and poor family genes.

Smallpox, for instance, was a highly contagious virus disease that occurred in devastating epidemics with a mortality rate as great as 30% to 40% . It wasn’t until the smallpox vaccine was successfully tested in 1796 by a British Country Doctor that the mortality rates decreased. These Cole children passed away 71 years later after the vaccine was tested, the same year as Confederation 1867. It goes without saying that doctors and medicine in the rural areas were scarce. Vaccines were relatively new and could parents really trust that they would prevent disease.

Concerning poor diet I have read that farmers took the cream off their milk, sold it to the cheese makers and fed their children the skimmed milk. Probably never thinking that whole milk was what their children should be having. I think these scenarios were called survival.

Times were different then. No refrigeration. No clean running water. No central heating. Over crowding.
Sanitation was unspeakable in today’s terms.

These conditions resulted in the establishment of a public health department that sent officials out to educate and encourage better living conditions.

Do you ever remember drinking from a dipper? Listen to this:
"It is a pity the old fashion cup or dipper from which all humanity imbibed in a carefree, democratic fashion should have to go. But today, whoever hangs out such a vessel is simply issuing an invitations to a house party of germs.

If every public institution, particularly schools, hotels, railway stations and trains would do away with the public drinking cup the percentages of tuberculoses and other communicable diseases would simply be lowered."

This statement was acclaimed to Mr W. Stephen Wilson at a Dominion Council of Health meeting 1919.

Another statement by a Dr. W.H. Hattice at the same meeting was:

"Forty percent of the rural school houses are not fit to raise swine in. As far as heating was concerned, it would be nearly noon before the temperature was fit to live in. There were no play areas. The gospel of PUBLIC HEALTH should be preached to the rural districts."
​
Thank goodness we have listened.
Lenna Broatch 2015

At that time, it was very expensive to find passage from the village to Hong Kong and then board a ship for the week-long journey to Vancouver, Canada.  Many young Chinese men wanted to go to Canada to work and support their families.  About a year after saving the little boy, Lum Kee found himself in Vancouver.  This was around 1904/05.  Slowly he made his way to Toronto working on farms.  I was told a story once of how he worked on a farm somewhere in the prairies. He stayed in the barn with the animals. It was so hot in the fields he worked in his underwear.

Eventually Lum Kee made it to Toronto.  He was a teenager, around 15 years of age. He ended up working as a house boy for a rich widow. She was fairly kind to him.  Lum Kee worked as a houseboy for approximately 4 years, until the old lady passed away.  At age 19 or 20, he began to work in the food industry with jobs including busboy, dishwasher, cook's helper, waiter and eventually a cook.

During his first few years in Canada, he continually send money back home to his family.  He made trips back to the village every 2-3 years.  He met his first wife, Fung Lam CHAN and eventually started a family during his frequent trips back home.   He had three children - the older being my grandmother Sun Ho, my late uncle Hong and my aunt Violet (Violet married Moon WONG and lived in Cobourg for many years - Moon and Violet now reside in Brampton close to where their granddaughter lives).

Lum Kee wanted to move his family to Canada, however, the government of Canada had instituted a "head tax" of $500 per person.  Back then it was next to impossible for someone working in a restaurant to make $500 a year.  He had four people to bring over - the fee to the government would have been $2,000.

During the 2nd World War, Lum Kee worked at a resort on an island in Northern Ontario.  It was there that he met his second wife - Doris Collins.  She wa a maid and he was kitchen staff.  Shortly after the war ended, the two married and settled in Colborne.  They opened a restaurant together on King Street (Highway 2) probably called "Lum Kee Garden". This would be in the late 40's early 50's timeframe.  The pair ran the restaurant until sometime in the early 60's.  By this time, Lum Kee was 70 years of age and the big highway 401 took away a lot of the traffic that would have passed the restaurant.

During his retirement years, Lum Kee spend time with the local Boy Scout group.  He volunteered his services as a cook and was always ready to do anything outdoors.  He was an avid fisherman and enjoyed hunting rabbits, moose and deer.

Doris Collins passed away in 2001 and is interred with her husband in the Salem Cemetery.

Days after Canadians took back Vimy Ridge in 1917, a soldier, Lt. Leslie Miller, pocketed a few acorns from a shattered oak tree while walking along the barren battlefield.  He mailed them home to Scarborough where they were planted on a family farm.

Today, we have a Vimy Ridge sapling planted in the old section of our Salem Cemetery, honouring all those who have taken part in the wars.

Taken in part from Toronto Star story by Jim Coyle.
​ 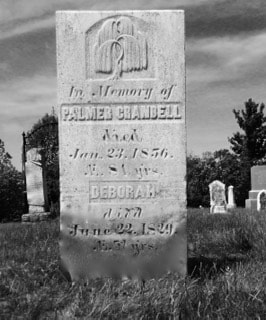 Palmer Crandall was born 12 May 1772 (246 years ago) in Duchess Co., New York.  He died 23 January, 1856 in Haldimand Township and is buried in Salem Cemetery, located at Salem Corners, Cramahe Township.  His first wife was Deborah who dies on 23 June, 1828 in Cramahe Township.  Both names are on the same marker.

Palmer and Deborah had 15 children, many of whom moved back to the United States; Hannah, John Vincent, Stephen P., Jeremiah, James, Elizabeth, Joseph, Hiram, Harriet, Reuben A., Julia Ann and Emily.

Palmer spent most of his life as a farmer and was classified as a "yeoman", a free holder class below the gentry.  He and Deborah were very active in the Baptist Church of Cramahe. He was sent as a delegate on several occasions to other church associates.  In 1847, he joined the Baptist Church of Haldimand Township which his brother Rueben founded in 1798.